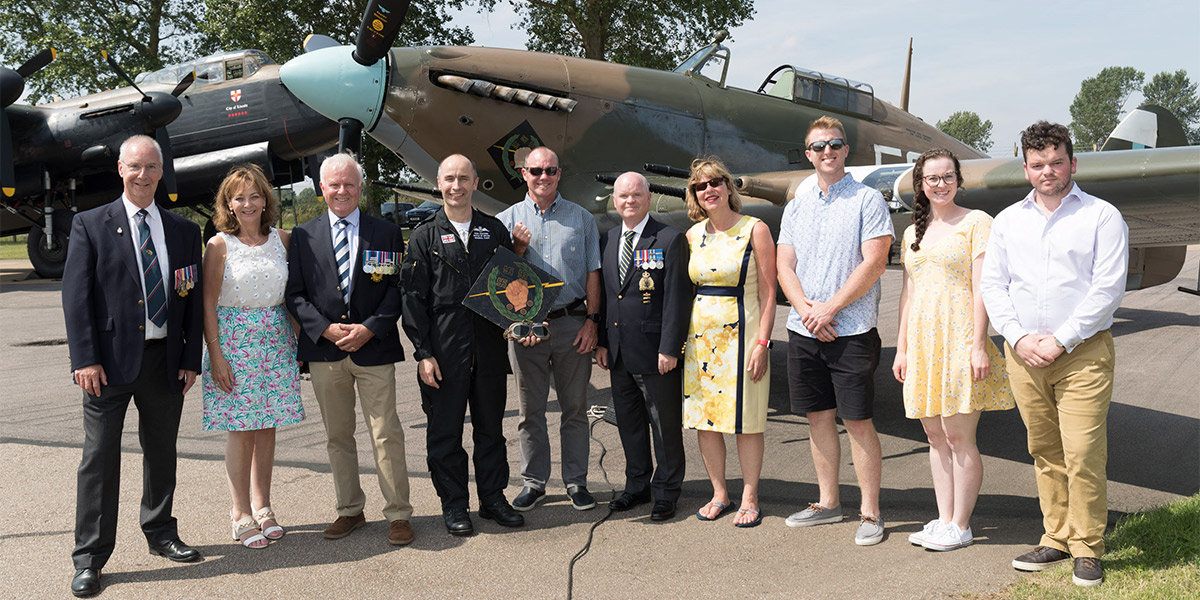 Since 2012 BBMF Hurricane Mk IIC PZ865 has been painted in the South East Asia Command, 34 Squadron colours of the personal aircraft of Flight Lieutenant Jimmy Whalen DFC RCAF. Jimmy Whalen was shot down and killed by Japanese ground fire on 18th April 1944, whilst he was flying another Hurricane, five days before his 24th birthday. At the end of the 2019 display season PZ865 will be flown to Biggin Hill to undergo a ‘Major’ maintenance programme under contract with The Spitfire Company, from which it will emerge in a new colour scheme as an all-black 247 Squadron night-fighter Hurricane.

On 24th July the BBMF was delighted to host a visit from members of Jimmy Whalen’s Canadian family to see Hurricane PZ865 in the colours of Jimmy’s ‘EG-S’ with his personal nose art, for a final time.

Jimmy Whalen’s closest living relative, nephew Mark Whalen, with his son Jeremy, were amongst the group of Canadian visitors. Mark’s father, Jimmy’s brother Bob, also served with the RCAF as an air gunner during World War Two. He apparently talked little about his own wartime experiences, but was very proud of his fighter pilot brother, he never forgot him and always grieved his death. Another of the Whalen family, Bill Whalen, who is a serving member of the Royal Canadian Mounted Police was on a return visit to the BBMF. He had previously visited in 2014 to see PZ865 in his relative’s colours, having helped the Flight with the background story, the details of the nose art and with photographs. This time he brought his wife Laura, his daughter Emily and his son Peter with him.

After Jimmy Whalen was killed in April 1944, the original nose art panel from his Hurricane, HW840 ‘EG-S’, which Jimmy painted himself, was saved by his aircraft fitter, Leading Aircraftsman (later Warrant Officer) Tom ‘Paddy’ Evans, from Ireland, who cared for it for the rest of his life. The artwork shows a laurel wreath surrounding a clenched fist (a Whalen family emblem) holding a lightning bolt, with 3 swastika kill symbols above it and 3 Japanese red roundels (Hinomaru) symbols below it, signifying Jimmy’s kills.

The nose art panel was gifted to the Whalen family in Canada in 2006 by the Evans family, after Tom had died. It has been on loan with the BBMF since 2012. Tom Evans’ son Paul and his wife Pauline were part of the group of visitors on 24th July. There must have been a remarkable bond between pilot and ground crew for Tom Evans to save and care for the nose art panel for the rest of his life, in memory of his pilot and his friend Jimmy Whalen. On 24th July the nose art panel was presented permanently to the BBMF for safe keeping. Bill Whalen said that he believed that the BBMF is the spiritual home of the fighter pilot, Jimmy wanted nothing more than to be a fighter pilot and he would be pleased that his nose art was being held by the BBMF.

Meanwhile, Jimmy Whalen’s spare pair of tinted flying goggles that were saved from his aircraft, ‘EG-S’, by LAC Joe Smith, Jimmy’s wireless mechanic, in 1944, which had been on loan with the BBMF, were returned to the Whalen family by OC BBMF, Squadron Leader Mark ‘Disco’ Discombe.

The visitors were able to watch a flying display by Hurricane PZ865, flown by Group Captain Mark Flewin, the RAF Coningsby Station Commander, who needed to fly a practice display for currency that day. They were then able to explore the Hurricane close up and each got to sit in the cockpit whilst OC BBMF explained it all to them. For some it was an emotional experience to sit in a Hurricane wearing the colour scheme of their ancestor and to gain an insight into what it was like for him to go to war in an aircraft like this.

Mark Whalen said that the BBMF team “has blown us away”. He also said that he would forever be grateful and “we reflect on an experience not possible to duplicate for the rest of our lives.” Paul Evans said: “My family and I would like to thank the BBMF for all it has done in remembrance of Jimmy Whalen and my father.”

For the BBMF it was a privilege to host the visit and to meet the modern family of Jimmy Whalen as PZ865 comes to the end of its time in his colours.