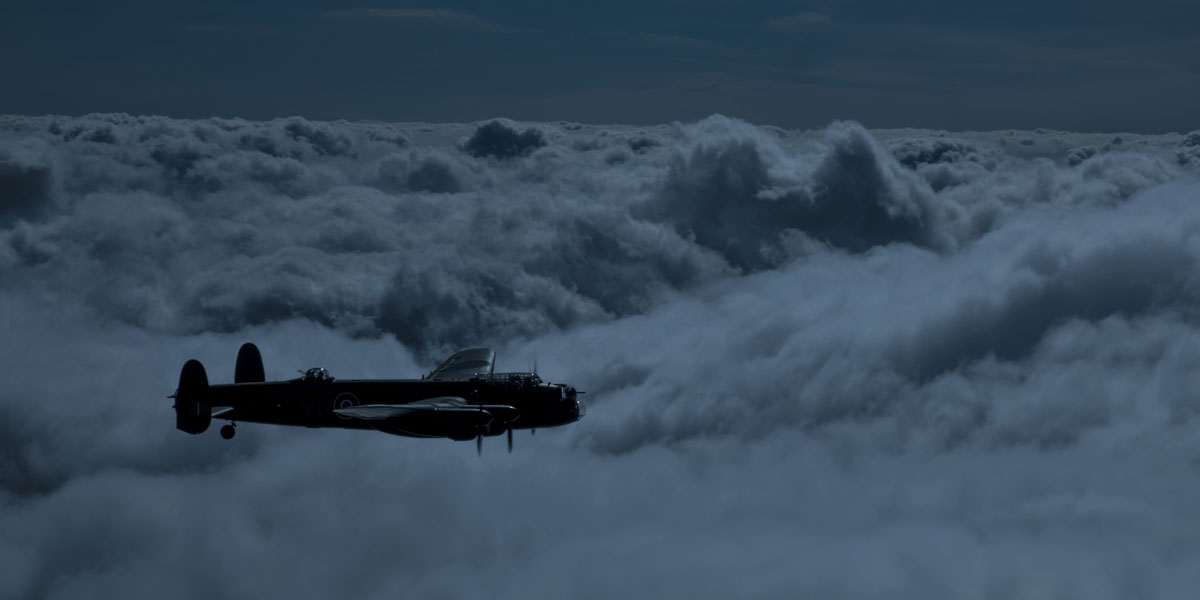 Seventy-five years ago this month, on the night of 14th February 1943 – St Valentine’s Day – RAF Bomber Command dispatched 142 Lancasters from Nos 1, 5 and 8 Groups to bomb the northern Italian city of Milan, a round trip of over 1,500 miles. In the early hours of 15th February, having made the long flight over the Alps, the bombers converged on Milan, concentrating the attack into the shortest possible space of time to overwhelm the defences. 110 tons of high explosive bombs and 166 tons of incendiaries were dropped, damaging several factories and railway yards, and starting many fires that could be seen from 100 miles away by the homebound bomber crews.

​A Lancaster from 103 Squadron, W4362 ‘PM-P’, piloted by New Zealander Squadron Leader Walter Powdrell, was hit and set on fire by incendiary bombs dropped from another Lancaster over the target. Three of the crew managed to bale out to become POWs for the rest of the war: Powdrell and three other members of the crew were killed. Another Lancaster from IX Squadron, ED495, had a very narrow escape from a similar situation; fortunately the wireless operator standing in the astrodome saw the other bomber directly above and commanded his pilot to turn hard port to avoid the falling bombs.

A second Lancaster, L7547 ‘EM-M’ of 207 Squadron, was lost on the return flight when the overheating port outer engine set fire to the wing. The aircraft crashed near Saint-Brisson in Central France. Three of the crew were killed when their parachutes did not open after they baled out; two more lost their lives when the aircraft crashed with them still inside it. The pilot, Flight Sergeant John Whyte, and the Flight Engineer, Flight Sergeant Stanley Eyre, miraculously survived, having been blown out of the cockpit. They evaded capture with the help of the French Resistance and eventually returned to England.

A third bomber nearly failed to make it home. Lancaster ED377 ‘SR-X’ of 101 Squadron had taken off from Holme-on-Spalding-Moor, in the East Riding of Yorkshire, at 18:50, flown by pilot Sergeant Ivan Henry Hazard and his crew. (101 Squadron was flying standard Lancasters at this point of the war. It moved to Ludford Magna in June 1943 and was equipped with Special Duties ‘ABC’ Lancasters equipped with ECM radio jamming equipment and an eighth German-speaking crew member later that year). After an outbound flight of almost 4 hours, the crew of ED377 bombed their aiming point from 11,000 feet, but some of their incendiary bombs hung up and failed to release. Six minutes later, whilst the crew were trying to resolve the problem, ED377 was attacked by an Italian Fiat CR.42 ‘Falco’ biplane night fighter, flown by Tenente Cesare Balli of 41° Stormo.

The first, close range burst of fire from the CR.42’s two 0.5 inch machine guns hit the hung-up incendiaries, starting a fierce fire. The Lancaster’s fuselage became a mass of flames, which quickly reached the mid-upper turret. Despite the flames and intense heat, the mid-upper gunner, Flight Sergeant George Dove DFM, who was on his second tour of operations, remained at his post, manning his guns, suffering second degree burns to his hands and face. The rear gunner, Flight Sergeant Leslie Airey, was injured in the legs and received facial burns, but also remained at his post. In addition, a large hole was torn in the rear fuselage floor forward of the rear turret, the aircraft’s intercom system was damaged and there were numerous holes in the starboard centre fuel tank which began leaking precious petrol. Both gunners engaged the Italian night fighter and it was seen to dive away on fire; they claimed it as destroyed. (The Italian night fighter pilot, Cesare Balli, is thought to have survived the war, but nothing else is known of him.)

The Lancaster’s pilot, Sergeant Hazard, dived the aircraft down to 800 feet in an attempt to extinguish the fire, whilst ordering the crew to prepare to bale out. Unfortunately, in the confusion the bomb aimer, Pilot Officer Moffat, baled out prematurely; he became a POW for the remainder of the war.

George Dove, the mid-upper gunner, scrambled out of his turret and disregarding his burns, the roaring flames and exploding ammunition, he extricated the rear gunner from his turret and rendered first aid.

The other remaining crew members, Pilot Officer Fred Gates (wireless operator), Sergeant Bill Williams (navigator) and Sergeant Jim Bain (flight engineer) tackled the fire with extinguishers and succeeded in getting it under control. Meanwhile, Hazard managed to coax the Lancaster up to 15,500 feet on three engines to cross the Alps. Then the starboard outer engine failed and had to be shut down and feathered.

Flying on two engines, the crew was forced to steer through the Alpine valleys between the mountain peaks.  Eventually, the aircraft reached England, landing safely at the fighter airfield of Tangmere without hydraulics, with only 10 degrees of flap available, and with only 15 gallons of useable fuel remaining.

As the sole remaining officer in the crew, Pilot Officer Fred Gates was awarded an immediate DSO, whilst the SNCOs, Hazard, Williams, Bain, Dove and Airey were each awarded the Conspicuous Gallantry Medal. (By the war’s end 109 CGMs had been awarded to operational aircrew; 89 of these went to Bomber Command with 59 going to those flying Lancasters.)

Sadly, after their heroics on the night of 14/15th February, Hazard, Williams, Bain and Gates were not to survive the war. The first three were killed in an accident in Lancaster ED446 during a training flight only a month later, while Gates was killed in a 101 Squadron Lancaster which crashed returning from a raid in May 1943. The gunners of their crew were still recovering from their injuries when the rest of their crewmates were killed. Both of the gunners survived the war, George Dove was treated for his burns and became a member of the ‘Guinea Pig Club’; he died in 2005.

The Lancaster that the crew had fought so valiantly to return to England, ED377, was repaired and flew again, only to be shot down by a German night fighter during a mine laying operation on 27/28th June 1943 with the loss of all but one of the crew.