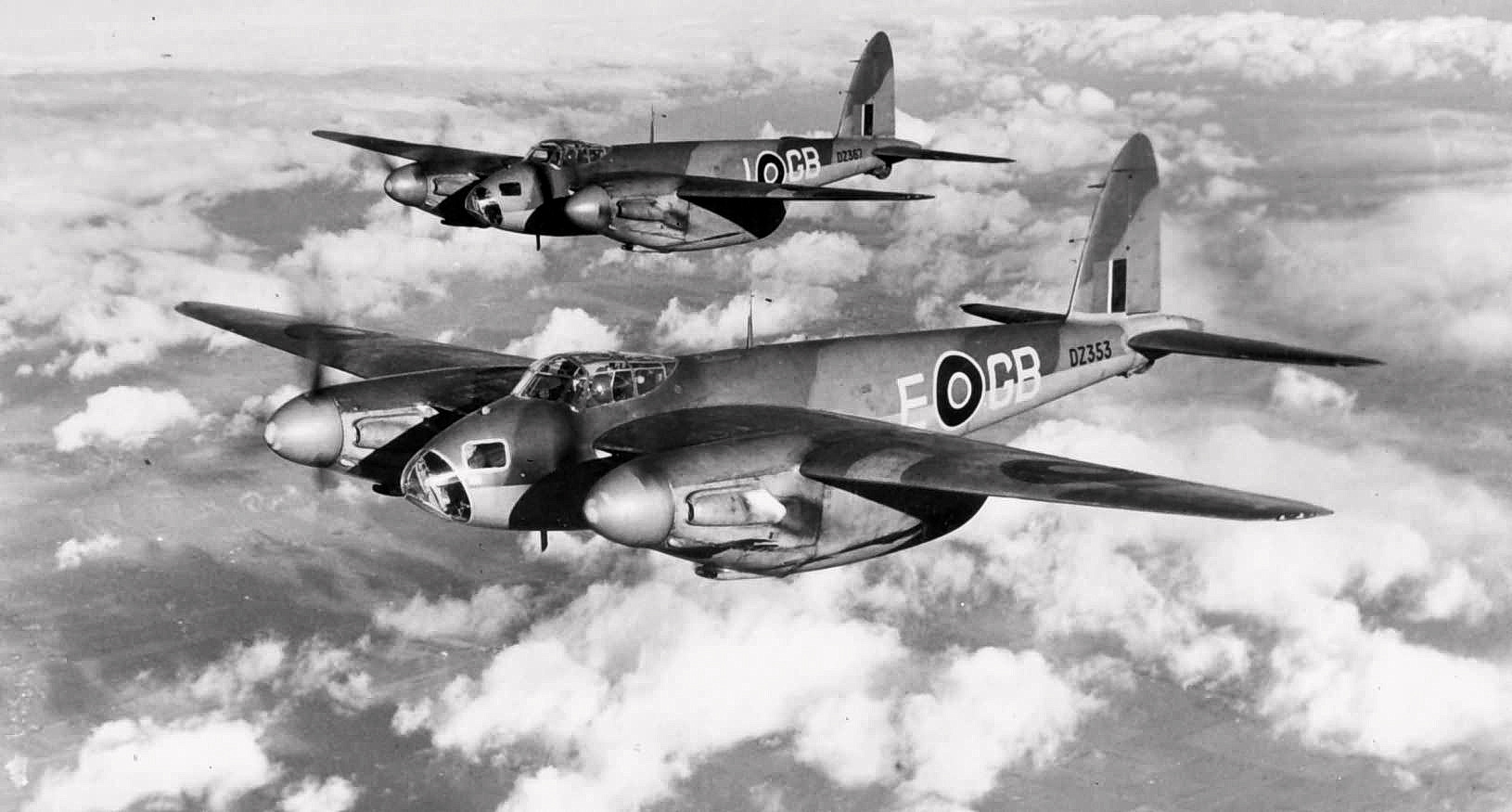 On Saturday 30th January 1943, 80 years ago this month, Germany held a day of celebrations to coincide with the tenth anniversary of Adolf Hitler’s rise to power. Berlin would host rallies, and a speech by Reichsmarschall Hermann Goering, from the Air Ministry building, would be broadcast on radio throughout the Third Reich at 11 a.m. Later that afternoon, speeches by Goering and by Reichsminister Joseph Goebbels would also be broadcast, when they addressed a crowd of thousands assembled in the Schöneberg Sportpalast, Berlin’s biggest indoor sports and meeting venue. The RAF, meanwhile, planned to spoil the party with their first daylight bombing raid on the German capital.

The three Mosquitoes flew at “wave top” height across the North Sea, before climbing to 25,000 feet, in and out of cloud. They met no opposition and as they approached Berlin they emerged into clear skies, descending to low level for the run in to the target, which was the Haus des Rundfunks, headquarters of the German State broadcasting company. Despite having flown some 500 miles in difficult weather they were exactly on time. As Goering began to speak, air raid warnings sounded in Berlin, anti-aircraft guns began to blast away and the sound of Merlin engines and exploding 500-lb bombs could be heard. The broadcast engineers shut down the transmission and listeners were instead treated to a scratchy recording of classical music for over an hour, before an apparently furious Goering was able to return to the microphone. The bombing was inaccurate and did little damage but the effect was exactly what had been hoped for. All three Mosquitoes returned safely to Marham.

At 13.25 in the afternoon, just before the 105 Squadron crews from the morning raid returned, three Mosquitoes of 139 (Jamaica) Squadron took off from Marham and followed a similar route to Berlin, reportedly through some “filthy” weather over Germany. These three Mosquitoes were crewed by Squadron Leader Donald Darling DFC with his navigator Flying Officer Bill Wright in Mosquito DZ367, Sergeants Joe Massey and Richard “Lofty” Fletcher in DZ379, and Flight Sergeant Pete McGeehan RNZAF with Flying Officer Reg Morris in DK337. As Goebbels stepped up to the lectern at the Schöneberg Sportpalast rally, the Mosquitoes arrived over Berlin in clear skies. This time, however, the defences were on full alert and sent up great fusillades of anti-aircraft fire. The radio broadcasting engineers stayed with Goebbels, who delivered his address punctuated by the faint sounds of bomb blasts, roaring Merlin engines and anti-aircraft fire. Like the earlier raid, the attack did little damage, but nonetheless created the desired effect. Sadly, as the Mosquitoes raced away, DZ367 was hit by ‘flak’ and crashed, killing both of the crew, Squadron Leader Donald Darling DFC and Flying Officer Bill Wright. In the Mosquito they sat side by side; they now rest side by side at the Berlin 1939-45 Commonwealth War Cemetery within the city limits. The other two Mosquitoes returned safely to Marham, having outrun some Luftwaffe Fw 190s which attempted to intercept them.

The five crews which returned from this, the first daylight raid on Berlin, were all decorated. Squadron Leader Reynolds was awarded the Distinguished Service Order (DSO), the other officers each received the Distinguished Flying Cross (DFC) and the Flight Sergeant and Sergeants received DFMs. A press conference was held with the Mosquito crews at the Air Ministry in London the next day, when they were photographed and interviewed. Navigator Sergeant “Lofty” Fletcher summed the mission up in a few nervous sentences, seemingly more intimidated by reporters than combat: “We got over to the other side…and we…we approached Berlin above the cloud. We added our contributions to the festivities and, uh…headed for home. I personally didn’t see any flak. But I was told there was quite a lot of it knocking around. But after all, what the eye doesn’t see the heart doesn’t grieve over.” New Zealand Flight-Sergeant Peter McGeehan said: “Some flak popped up at us, close enough to be unpleasant, but not hitting the aircraft. It promised to be persistent, so we dived down, setting off for home. As we were diving we saw two single-engine fighters heading towards us, but we were going so fast in the dive that they had no chance and we soon left them comfortably behind. We found cloud cover over Holland and as we passed over the Friesian Islands encountered light flak. The rest of the trip was uneventful. We reached base two minutes ahead of schedule and then went for interrogation. It was late when we got our tea, but it was steak and chips, which were worth flying to Berlin for.”

Sadly, of the 10 airmen who returned from this Berlin raid, five were killed later in the war. Peter McGeehan and his navigator Reg Morris were shot down by ‘flak’ near the Dutch island of Texel in a Mosquito on 16th March; both were killed. In November 1943 John “Flash” Gordon and his navigator Ralph Hayes were killed when their Mosquito crashed near Norwich whilst returning from a raid. Tony Wickham was killed in a flying accident in June 1944 whilst serving as an instructor with No 60 OTU, providing training to Mosquito night-intruder crews.