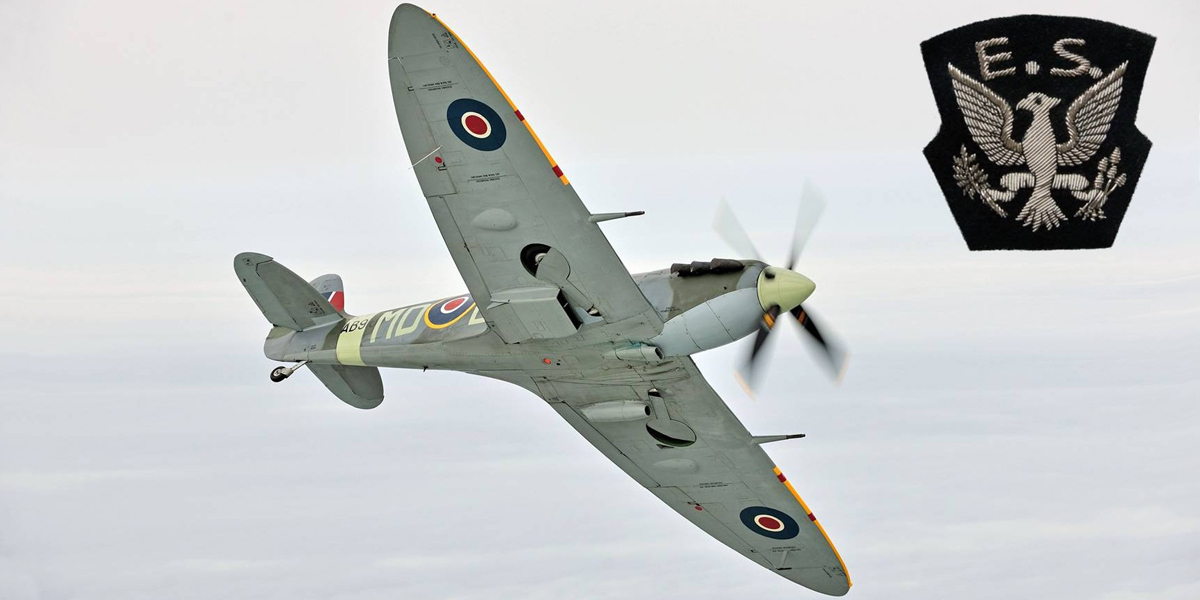 Many readers will know that BBMF Spitfire Mk Vb AB910 flew with No 133 (Eagle) Squadron during 1942. AB910’s involvement in the Dieppe Raid on 19th August 1942 was covered in an item in the August newsletter.

On 23rd September 1942, No 133 Squadron moved from Biggin Hill to Great Sampford and swapped its Mk V Spitfires (including AB910) for brand new Mk IX Spitfires with considerably improved performance, especially at altitude. Unfortunately, the 133 Squadron pilots were not to enjoy their Mk IX Spitfires for very long.

75 years ago this month 133 Squadron was the main victim of the tragic so-called Morlaix disaster, which virtually wiped out the unit. On 26th September 1942 a fighter escort force of three Spitfire squadrons – 133 (Eagle) Squadron with its American pilots, 401 (RCAF) Squadron from Kenley, and 64 Squadron from Hornchurch – were tasked to escort some USAAF B-17s on a daylight bombing raid on Morlaix, Brittany, France.

This force of Spitfires was to have been led by the Kenley Wing Leader, Wing Commander Brain Kingcombe, but he was delayed and so the lead of the fighter escort force was given to the Officer Commanding 64 Squadron, Australian Squadron Leader Tony Gaze; Kingcombe eventually caught up and led 401 Squadron. Meanwhile the C.O. of 133 Squadron, American, Red McColpin, had been ordered to go to London to be sworn in as a Major in the USAAF. 133 Squadron was therefore being led by one of the flight commanders, British Flight Lieutenant Gordon Brettell.

On the morning of 26th September 1942 the three Spitfire squadrons deployed to Bolt Head in South Devon to refuel and to brief. The sortie briefing led the Spitfire pilots to expect little cloud and a strong headwind outbound. In the event, when they were over the Channel, they encountered heavy cloud cover obscuring the ground features and, unknown to them at the time, a 100mph tailwind, which blew the formation much further south than intended and out of radio contact with the controller in England.

Returning into the headwind, with fuel running low, navigating by dead reckoning alone, above 10/10ths cloud cover, the timing suggested that they should be approaching the British coastline. The American pilots of 133 Squadron spotted what they thought was the English coastline through a gap in the clouds and descended beneath it, despite being told by Gaze not to do so. Unfortunately, they were over Brest and the 133 Squadron Spitfires were subjected to all that the German defences could throw at them.

133 Squadron lost 11 of their 12 brand new Mk IX Spitfires. The twelfth crash landed on the south coast of England, out of fuel, having turned back early with an engine problem. Four of the American Eagle Squadron pilots were killed, six became POWs, and one, Pilot Officer Robert E Smith, baled out and evaded capture, eventually to return to England via Spain. Gordon Brettell was one of those captured; he later took part in the 'Great Escape' from Stalag Luft III in March 1944, but was one of the men re-captured and subsequently shot by the Gestapo.Three of the 401 Squadron RCAF Spitfires also failed to return, but the remainder of the Wing, including all of the 64 Squadron Spitfires led by Gaze, reached England safely, but in many cases only just.

Tony Gaze took the blame for this unfortunate and tragic incident. The official inquiry that ensued eventually concluded that the debacle was the result of many contributing factors, but particularly the incorrect weather forecast. Nonetheless, Gaze was made something a scapegoat for the event and in November he was transferred back to 616 Squadron as a Flight Commander, demoted back down to the rank of Flight Lieutenant. He continued to fly operationally throughout the war, became a high-scoring fighter ace and was awarded the DFC and two Bars. He died in Australia in 2013 aged 93.

Three days after the Morlaix disaster the three RAF ‘Eagle’ Squadrons, including the remaining pilots of 133 Squadron, were incorporated into the USAAF as Nos 334, 335 and 336 Fighter Squadrons of the Fourth Fighter Group. It was a sad end for 133 (Eagle) Squadron.