Lancaster R5682 recovery in the Netherlands 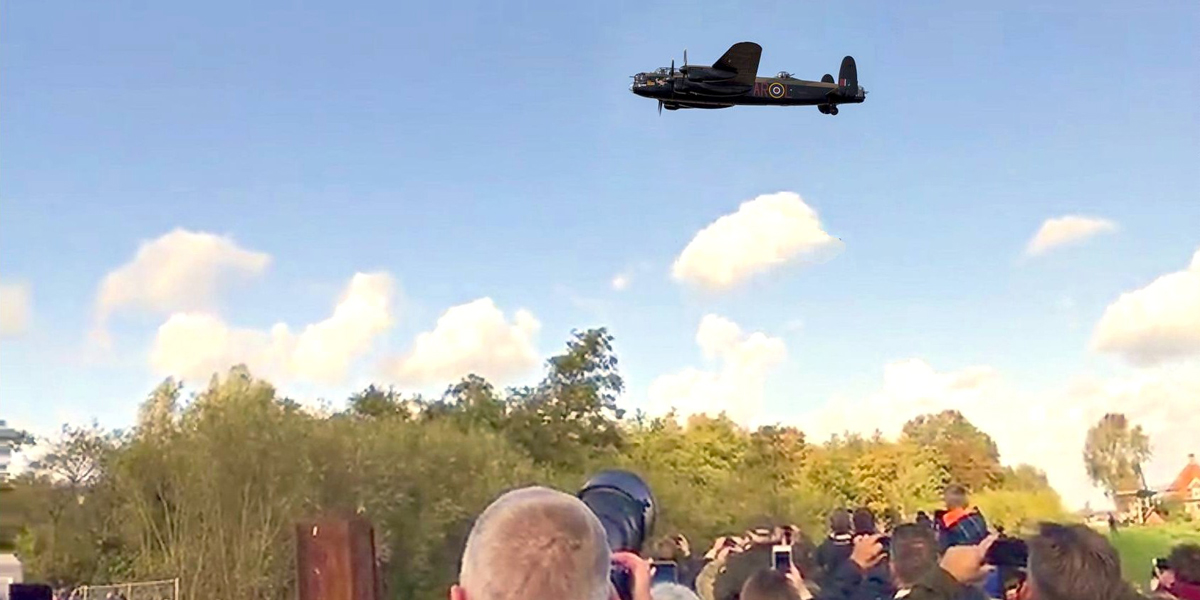 Lancaster R5682 recovery in the Netherlands

One of the very last events of the 2017 display season for BBMF Lancaster PA474 was a flypast on 3rd October over a site in the Netherlands to honour the crew of Lancaster R5682 ‘QR-R’ of 61 Squadron which was shot down on 5th September 1942 with the deaths of three of the crew. The other four crew members spent the rest of the war incarcerated as POWs.

The flypast marked the raising of items from R5682, along with human remains, in a bid by the Dutch to locate the missing rear gunner, Canadian Warrant Officer James Cooper, whose body has never been found. On the ground in Holland the event was attended by many Dutch people, including school children, personnel of the Royal Netherlands Air Force and also by members of James Cooper’s family.

The ambitious recovery operation, which began in August, was complicated by the Lancaster’s wreckage lying in peat under about 25 feet (8 metres) of water in a waterway in the Alde Feanen National Park, an area not dissimilar to the Norfolk Broads. The recovery team from Leemans Special Works, led by Dutchman Evander Broekman, built a huge cofferdam 50 feet (16 metres) deep around the location of the Lancaster, which earlier investigations had showed was largely complete, and then pumped out the water whilst maintaining the dam against the water pressure. They then used heavy digging machinery to dig down to the wreck. The operation highlights the lengths to which the Dutch will go to try to locate missing RAF airmen from World War Two.

Lancaster B1 R5682 ‘QR-R’ took off from 61 Squadron’s base at RAF Syerston, near Newark, Nottinghamshire, at 00:25 on 5th September 1942 for a bombing operation against Bremen. RAF Bomber Command sent 251 aircraft on this raid: 98 Vickers Wellingtons, 76 Avro Lancasters, 41 Handley-Page Halifaxes and 36 Short Stirlings. Twelve of these aircraft, including three Lancasters, failed to return. R5682’s crew was a mix of British and Canadian men. Pilot Officer Peter Joslin was the British pilot and captain of the aircraft. Flight Engineer Sergeant E V Booth, Wireless Operator Flight Sergeant B A Farmer and Bomb Aimer Flight Sergeant E J May were also British. The Navigator, Sergeant P J Bridgeman, and the two gunners, mid-upper gunner Flying Officer N D Mullins and Rear Gunner Warrant Officer James Cooper, were Canadians serving with the RCAF.

As R5682 crossed the Dutch coast on the way to its target, the Lancaster was hit by ‘flak’. Exactly what damage was caused is not known, perhaps the aircraft was on fire, but as if the crew did not have enough to contend with, the Lancaster was then intercepted and attacked by the experienced and high-scoring German night fighter ‘experte’, Hauptmann Helmut Lent, the Gruppenkommandeur of II./NJG 2, and his radar operator Leutnant Walter Kubisch. Lent had so far been credited with 52 ‘kills’ at this point of the war, including 44 at night. Based at Leeuwarden, II./NJG 2 was mainly equipped with Junkers Ju-88 night fighters, but Lent often flew a Dornier Do-215B-5, coded ‘R4+DC’, on his night fighter missions at this time. Lent’s attack and the onslaught of his 20mm cannons was fatal for Lancaster R5682 and it crashed near Warten, about 5 miles south-east of Leeuwarden, Holland.

During the attack the rest of R5682’s crew lost communications with James Cooper in the Lancaster’s rear turret. The pilot, Peter Joslin, was able to hold the Lancaster steady for long enough for four of the crew – Booth, Bridgeman, Farmer and Mullins – to bale out; they subsequently became POWs for the remainder of the war. Sadly, Joslin, May and Cooper did not make it and were killed. The bodies of Joslin and May were recovered and buried in Holland, but James Cooper was never found and it is believed that his remains were still with the aircraft, prompting the recovery effort this year.

The human remains and personal items that have been recovered are now going through the process of identification, which will take some time, and it is hoped that the mystery of missing gunner James Cooper may finally be solved. The BBMF Lancaster flypast on 3rd October was a poignant and fitting tribute.

Postscript: Lancaster R5682’s nemesis, Luftwaffe night fighter pilot Helmut Lent, claimed a total of 111 aerial victories, all but eight of them at night, including 59 four-engine bombers. On 5th October 1944, Lent was landing his Ju-88G-6 night fighter at Paderborn when an engine failed on the approach and he hit a power cable. Lent survived the crash, which killed his long-serving radar operator and his crew, but two days later he died of his injuries in Paderborn hospital, aged 26.