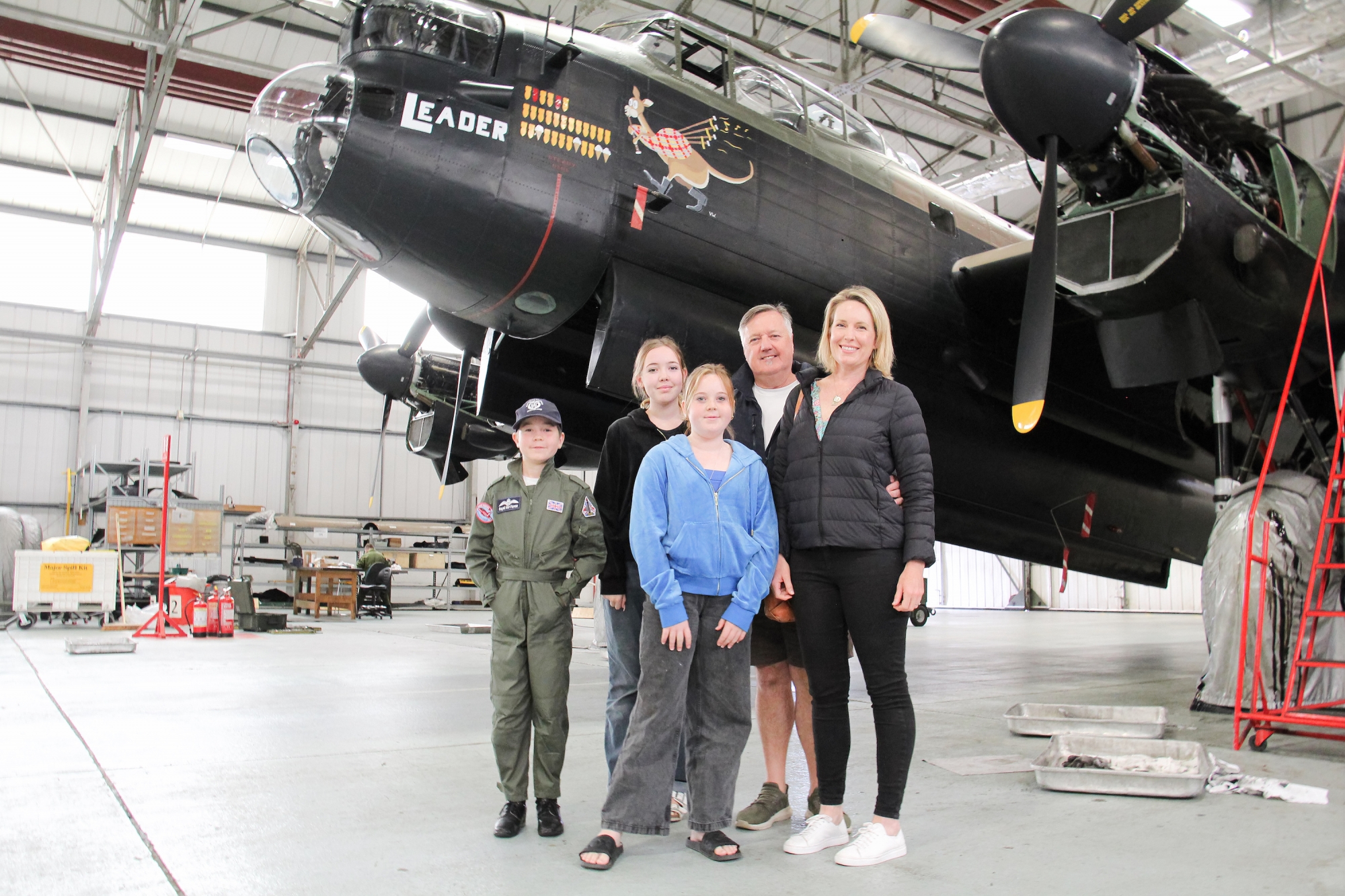 Header Image: Grant Moffitt and his family, wife Natalie and their three children Camden (aged 10), Savanah (aged 12) and Sierra (aged 14), visited the BBMF from Australia to see a Lancaster like the one his father flew with 460 Sqn during the Second World War.

The BBMF hosted a special visit on Tuesday 5th July when Grant Moffitt – the son of 460 Squadron Lancaster bomb aimer Warrant Officer Bob Moffitt (RAAF) – travelled from Australia with his wife Natalie and their three children, to see the BBMF Lancaster which is currently painted in a 460 Squadron (RAAF) colour scheme with its kangaroo nose art. After a good close-up look around the Lancaster, the visitors also viewed the other BBMF aircraft in the Flight’s hangar at RAF Coningsby. The story of the wartime adventures of Grant’s father Bob Moffitt is a dramatic one.

The story of the wartime adventures of Grant’s father Bob Moffitt is a dramatic one. He enlisted in the RAAF in July 1942 and trained as a navigator/bomb-aimer. The then Flight Sergeant Bob Moffitt joined the crew of an Australian pilot, Flying Officer Reg Jopling, as his bomb aimer. The crew, which consisted of four Australians, two British men and a Canadian, was assigned to 460 Squadron RAAF at Binbrook, Lincolnshire, in the summer of 1944.

The crew’s third bombing operation was as part of a large raid against an important railway centre at Courtrai (Kortrijk), Belgium on the night of 20th to 21st July 1944. Twenty-two Lancasters of 460 Squadron arrived an hour after the first wave to attack the triangle of main railway lines under the direction of a master bomber. The raid was a success and an effective bottleneck was created at a significant point in relation to the land battle.

The Jopling crew, flying Lancaster B III ND654 ‘AR-R for Robert’ which carried 11 x 1000 lb (450 kg) bombs and 4 x 500 lb (225 kg) bombs, took off from Binbrook just after midnight. After dropping the bombs on the target, R-Robert was attacked and shot down by a night fighter. The night fighter’s cannon fire tore into the starboard wing and set the petrol tanks on fire. Two of the crew, the flight engineer and the wireless operator were slightly wounded. The Lancaster was out of control and losing height rapidly and Jopling ordered the crew to abandon the aircraft whilst he tried to hold it steady. As the bomb aimer, stationed over the escape hatch, Bob Moffitt was first out at 9,000 feet, followed by the others of the crew, with the pilot last to bale out at about 3,500 feet.

Remarkably, the crew went very close to being the only one from 460 Squadron to all evade capture, doing so individually. Unfortunately, after a month on the run the mid-upper gunner, Sergeant Rob Mills RAF, was betrayed by a French Resistance Nazi collaborator and he became a Prisoner of War. The other six made it safely back to the UK although Bob Moffitt’s path to freedom was somewhat different from most other evaders.

Not only did Bob meet up with the French Resistance, he also fought alongside them, with one particularly dangerous event where he helped to defend a critical bridge, the Pont de Nieppe, over the River Lys between Armentieres and Nieppe, to keep it intact for the Allied land advance. For almost three days from 2nd September 1944, with machine gun in hand, Bob helped hold off repeated German attacks. On 5th September crack German SS troops arrived; they took many of the town’s residents hostage and forced them up the main road to the bridge. The presence of the human shields along with fierce fire from heavy machine guns and tanks forced the lightly-armed defenders of the bridge to scatter. Around a third of the French fighters were killed or subsequently executed. Bob was one of those who escaped the fighting and survived. Very fortunately, the next day the Welsh Guards took control of Nieppe and Bob Moffitt was back in Allied hands, although sadly the Germans had blown up the bridge.

Bob Moffitt believed the battle at Nieppe and his role in it was never properly acknowledged. He died in February 2013 not knowing that President Charles De Gaulle had unveiled a large stone monument at the bridge site in 1951 to commemorate the 65 brave men, including Bob Moffitt, that held the bridge against huge odds from the 2nd to 5th September 1944, especially the 20 Resistance fighters killed during the battle and the 18 captured and executed by the SS.

With such a remarkable background story, it was a pleasure to host the visit to the BBMF by Bob Moffitt’s son and grandchildren and to hear the details of his father’s story from him.