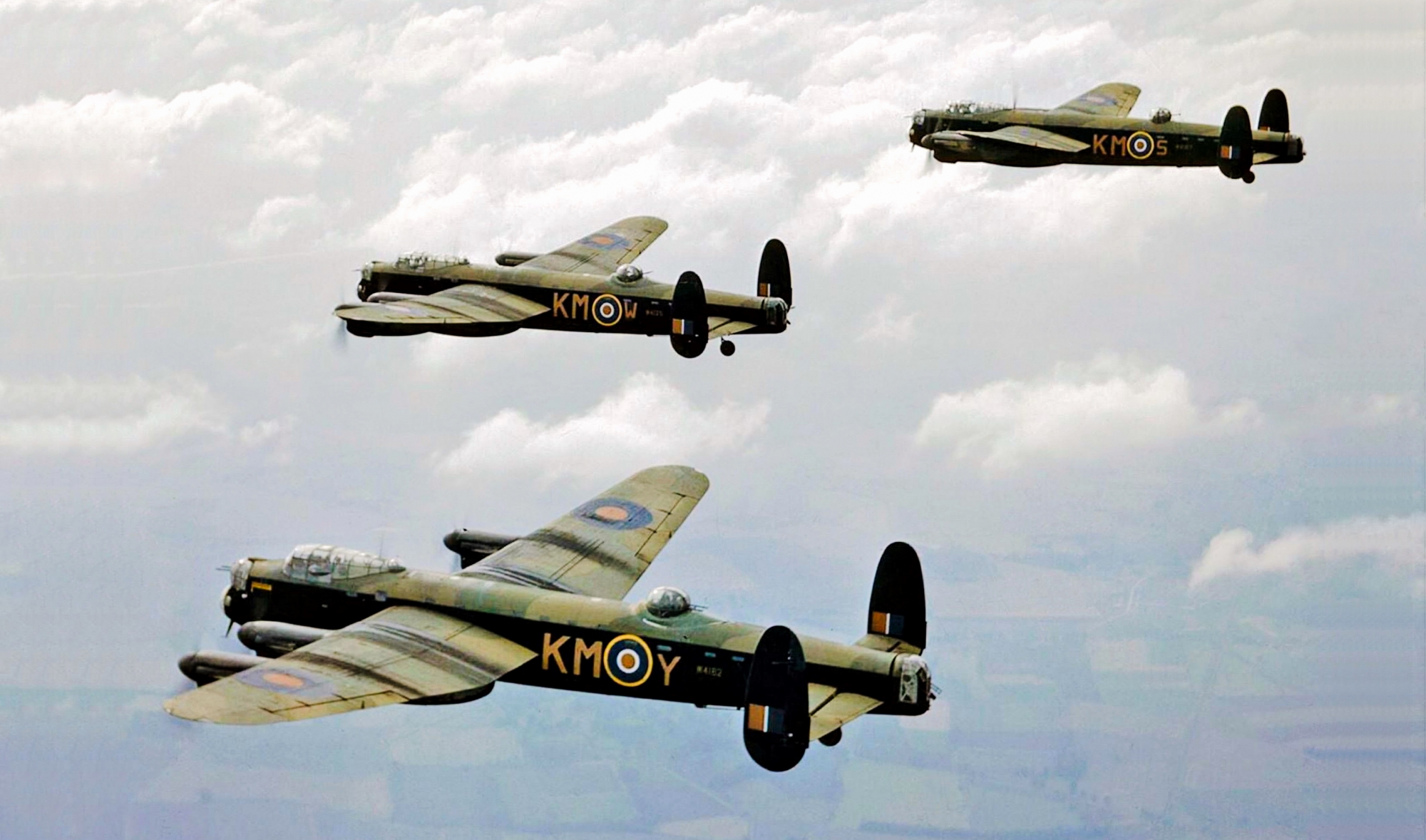 This beautiful and rare colour photo of three 44 Squadron Lancasters flying in formation in daylight, taken 80 years ago this month on 29th September 1942, has become well known to Lancaster aficionados. In a startling example of the casualties suffered by RAF Bomber Command during the Second World War, all three of these Lancasters and two of their crews were subsequently lost.

The aircraft furthest from the camera at the top of the picture, W4187 ‘KM-S’, was lost along with its entire crew of seven just three nights after this photo was taken, during an operation against Wismar, on the Baltic coast of Germany. Outbound to the target the Lancaster was illuminated by a searchlight from a German ‘flak’ battery as it approached Skallingen in southern Denmark. In trying to escape the searchlight the Lancaster flew into the ground and exploded, two kilometres north of the searchlight position. The experienced pilot, Flying Officer Jim Stevens DFC DFM and his crew of six other airmen were all killed and were laid to rest in a cemetery at Esbjerg. They were placed in six graves and only after the war identified as being a crew of seven.

The Lancaster leading the formation (in the centre of the picture), W4125 ‘KM-W’, failed to return from a raid against Munich on 22nd December 1942, whilst being flown by a different 44 Squadron crew. Having lost an engine to ‘flak’ damage over the target, W4125 was homeward bound on three engines when it was attacked and shot down by a German Me Bf 110 night-fighter whilst still over Germany. Five of the crew, including the pilot Flying Officer Denzil Biggane DFC, were killed; two survived to become POWs.

The pilot flying W4125 for this photo, Sergeant Colin Watt RAAF, was the only pilot from those in this picture to survive the war. He completed a tour of ops with 44 Squadron, was awarded the DFM and was subsequently commissioned. After a tour as a pilot instructor at the Heavy Conversion Unit at Wigsley, he returned to Australia to fly Consolidated Liberators. Post war he had a distinguished career as an airline pilot. He died in Australia in 2019, aged 97. Four others of his crew also survived the war, but sadly two – flight engineer Jack Money and mid-upper gunner Eddie Harold – were killed flying with different crews during 1943.

Lancaster W4162, at the bottom of the picture, flew operations with 44, 83 and 460 (RAAF) Squadrons, but was lost with the latter unit during an ‘op’ against Berlin on 24th November 1943, when it was shot down over Germany by a Bf 110 night-fighter. It was now coded ‘AR-J2’ and had flown 25 ops with 460 Squadron alone. It was one of 28 Lancasters lost that night. Six of the crew, including pilot Flight Sergeant Roy Brown RAAF, were killed when the aircraft exploded in mid-air. Miraculously the mid-upper gunner, Pilot Officer Duncan Crookston RAAF, was blown out of the aircraft and survived, badly injured, to become a POW. His injuries resulted in him being repatriated to England as part of a prisoner exchange in February 1945.

The pilot flying W4162 ‘KM-Y’ in this photo, Rhodesian Pilot Officer Tom Hackney, was killed along with all of his crew on 7th November 1942, flying a different Lancaster with 83 Squadron during a raid on Genoa, Italy. He had completed numerous operations with 44 Squadron, been promoted to Flying Officer and his DFC was gazetted two weeks after his death. His Lancaster R5566 was damaged and crashed into the sea between Corsica and the Italian mainland with the deaths of all on board.