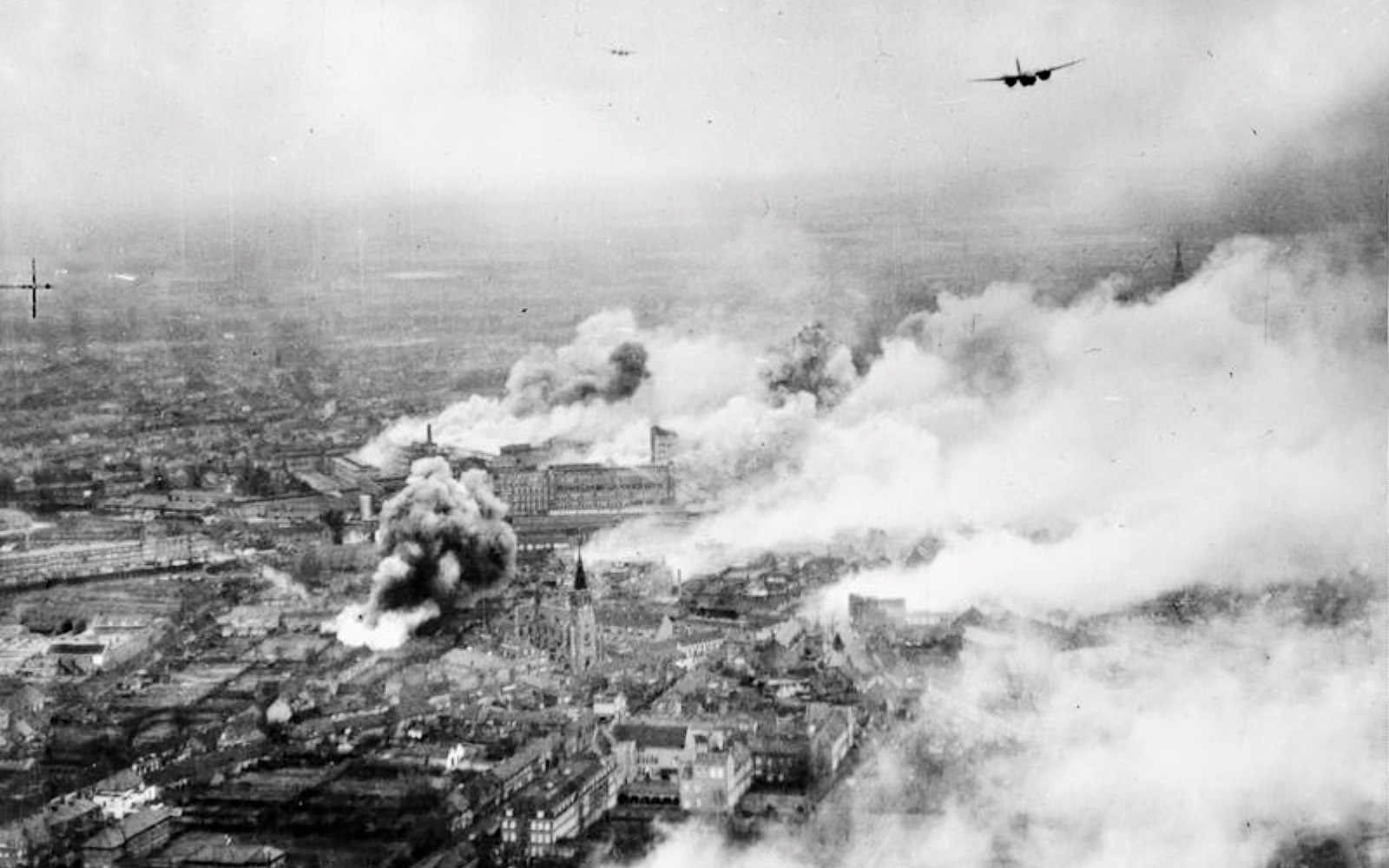 Header Image: Operation OYSTER – Douglas Boston twin-engine medium bombers over the burning Emmasingel lamp and valve factory at the height of the raid on 6th December 1942.

Eighty years ago this month, on Sunday morning 6th December 1942, the RAF bombed the Philips factories scattered throughout the city of Eindhoven in the Netherlands. The Philips company was a major producer of electronic parts, including one third of the supply of vacuum tubes for radios used by the German military; it also undertook radar technology research.

With the Philips works being located in the middle of the city, the raid had to take place in daylight and at low level to ensure accuracy and to minimise casualties among Dutch civilians. Four-engine heavy bombers would have been too vulnerable and the targets were beyond the range of fighter escort, so the task was allocated by Bomber Command to No 2 Group’s twin-engine medium bombers. No 2 Group was the sole specialist day-bomber force and consisted of ten medium bomber squadrons flying Lockheed Venturas, Douglas Bostons, North American B-25 Mitchells and de Havilland Mosquitoes. The crews of the two B-25 Mitchell squadrons – 98 and 180 Squadrons – were considered too inexperienced so they were not used, but the other eight squadrons were committed to the raid. The attacking force of 94 aircraft was made up of: 36 Bostons from 88, 107 and 226 Squadrons; 48 Venturas from 21, 464 (RAAF) and 487 (RNZAF) Squadrons; and 10 Mosquitos from 105 and 139 Squadrons.

Full-scale practices, with large formations flying at low level, refined the plan. The Bostons would attack first, followed by the Mosquitos, with the Venturas arriving last. The three groups were to arrive over the target in close succession. The attack was to be concluded within the span of 10 minutes. Wing Commander James Pelly-Fry, the C.O. of 88 Squadron (Bostons) was chosen to lead the attack. He was an experienced pilot who had been in command of the unit since the start of the year. Pelly-Fry was to fly one of the two lead Bostons against the Emmasingel factory, and would be the first man over the target. The Mosquitos were led by Wing Commander Hughie Edwards VC DFC, the C.O. of 105 Squadron.

On the morning of Sunday 6th December – a Sunday was chosen so that the factories would be virtually empty of Dutch workers – the attacking formations flew their routes to Eindhoven at 100 feet or less. Over the city the bombers climbed to 1,500 feet to release their bombs against the targets in shallow dives.

The raid took the German defenders by surprise and the results were considered a success by the British. Over 60 tons of bombs were delivered on the factories with a high degree of accuracy and concentration. Reconnaissance photographs showed severe damage to the factories. Sadly, 135 Dutch inhabitants of Eindhoven were killed. The Dutch made sure that repairs were as slow and deliberate as possible. (Ten Mosquitoes attacked the Philips plants again on 30th March 1943; it took six months to restore production.)

From the attacking force on Operation OYSTER, nine Venturas, four Bostons and one Mosquito failed to return; a loss rate of 16 percent. In addition, 37 Venturas, 13 Bostons and 3 Mosquitoes were damaged, seven seriously; 57 per cent of the force. There were surprisingly few losses and little damage caused by German fighters; the bombers proving difficult targets at ultra-low-level. At least 31 of the aircraft had bird strikes, some hit trees and several Venturas probably hit buildings whilst bombing through smoke; light flak damaged some aircraft and possibly shot down others. The group had to stand down for ten days while aircraft were repaired and losses replaced. Most tragically, 62 RAF aircrew did not get home to enjoy the forthcoming Christmas.